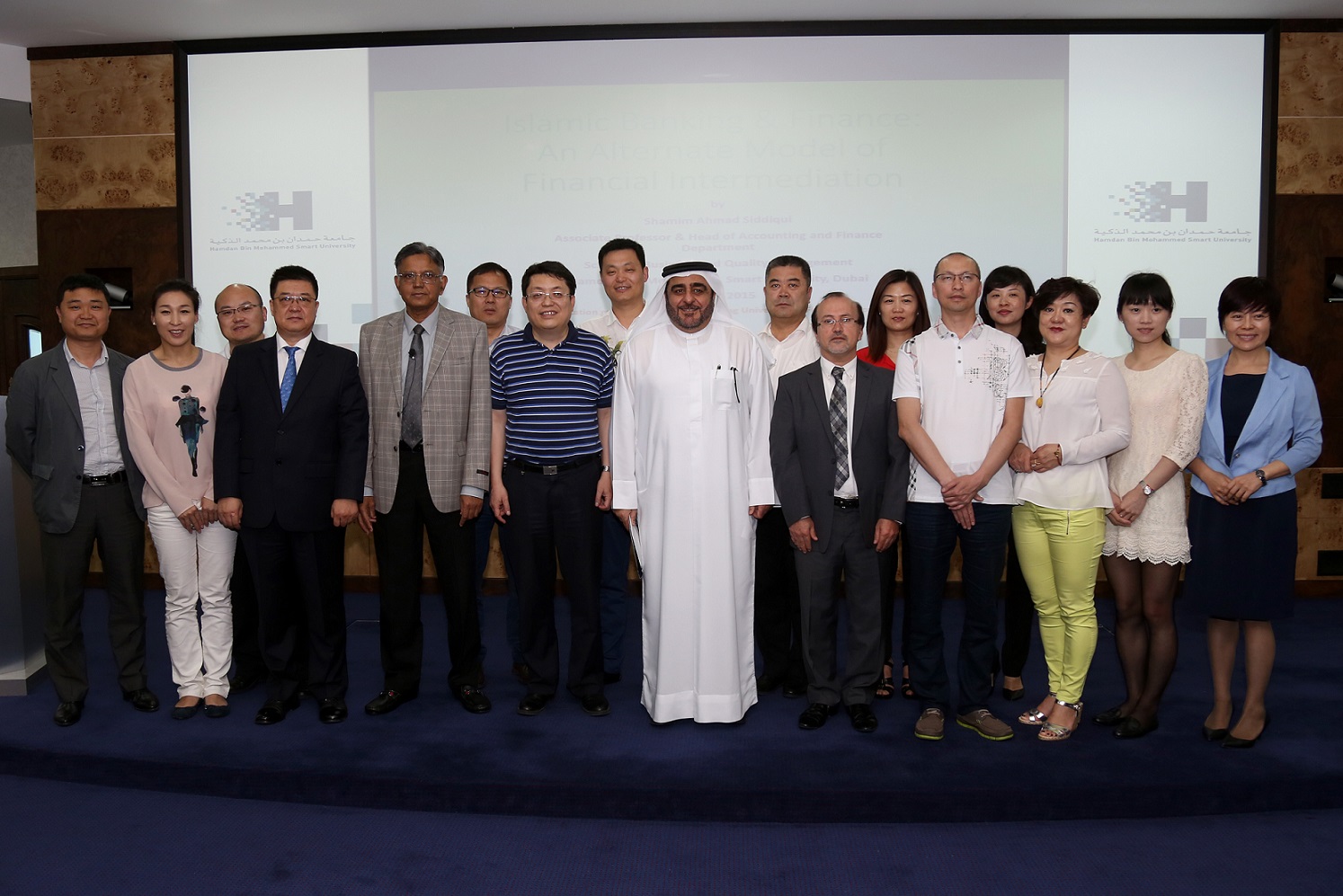 In line with the ambitious Chinese ‘One Belt, One Road’ initiative

UAE, July 22, 2018 - In line with the nationwide celebrations of UAE-China Week, which is being held from July 17 to 24, 2018 and in honor of the Chinese President Xi Jinping's visit to the UAE, Hamdan Bin Mohammed Smart University (HBMSU) has reaffirmed its commitment to building bridges of knowledge, cultural, and economic exchange with China by organizing the China-UAE Conference on Islamic Banking and Finance (CUCIBF III) for the third consecutive year, on November 7-8 in China.  The two-day event, which is being organized under the theme, ‘The potential for participative economy and financial system: growth, development, integration, and cooperation,’ will form part of the efforts aimed at driving economic growth and comprehensive development through the Islamic economy in line with the initiative launched by His Highness Sheikh Mohammed Bin Rashid Al-Maktoum, Vice President and Prime Minister of the UAE and Ruler of Dubai, to establish Dubai as the Capital of Islamic Economy and in support of the ‘One Belt, One Road’ initiative.  The event is being organized by the UAE  Ministry of Economy, HBMSU’s Dubai Center for Islamic Banking and Finance, Dubai   Islamic Economy  Development  Center,   China  Islamic  Finance  Club,   ZhiShang    Inter-culture    Communication, and  Thomson Reuters as a knowledge.

The China-UAE Conference on Islamic Banking and Finance is strategically important as the first such event to consolidate the efforts of the UAE and China to support the global Islamic economy, which is expected to grow eight per cent annually to USD 3 trillion by 2021. The conference will explore new horizons to support the efforts to further enhance financial and economic integration and to strengthen historical economic ties between the Silk Road markets, embodying the objectives of "one belt, one way", with a focus on driving investment in Islamic sectors that offer promising opportunities for the UAE-China economic rapprochement.

Dr. Mansour Al Awar, Chancellor of HBMSU, said: “The ongoing UAE-China Week festivities celebrate the UAE's strong cultural and economic ties with China, while promoting and upholding the important values shared by the two countries. Building on the success of the last two editions of the China-UAE Conference on Islamic Banking and Finance and inspired by the vision of H.H. Sheikh Mohammed bin Rashid Al Maktoum, UAE Vice President and Prime Minister and Ruler of Dubai, to transform Dubai into a global capital for the Islamic economy, under the supervision of H.H. Sheikh Hamdan bin Rashid Al Maktoum, Crown Prince of Dubai and President of HBMSU, the 3rd Conference will facilitate exchange of ideas and development of effective strategies to leverage the benefits of Islamic finance, in line with the ‘One Belt, One Road’ initiative. The event will feature a high-level international participation aimed at driving stability and prosperity within the framework of productive collaborations and promotion of synergies between the public and private sectors.

Al Awar concluded: "The organization of the event comes at a very strategic time, accelerating the global trend towards the development of the traditional economic system using Islamic finance methodologies, and coinciding with the historic visit of the Chinese President to the UAE, which marks the beginning of a new era of distinguished historical relations between the two countries. The conference, which is considered the first initiative of its kind in the UAE, is aimed to stimulating concerted efforts to reach the common objectives of promoting and accelerating the growth of the Islamic banking and finance sector in the UAE and China. "

Being the first UAE university to host the China-UAE Conference on Banking and Islamic Finance, HBMSU has now hosted the event for the third consecutive year with wide regional and international participation. HBMSU continues to establish its leading role in supporting Dubai as the global capital of the Islamic economy. The event is the result of constructive cooperation between the University and the Ministry of Economy of the UAE, the Dubai Islamic Banking and Finance Center, and the Dubai Islamic Economic Development Center, in cooperation with the China Islamic Finance Club and ZhiShang Intercultural Communication, with the participation of Thomson Reuters as a knowledge partner.

By bringing together economists, bankers, decision and policy makers, investors and stakeholders of the Islamic economy, the event is expected to provide a strategic international platform to explore ways to enhance the financial and economic integration and strengthen the historic economic ties between the European and Asian markets linked by the Silk Road, in line with the objectives of the ‘One Belt, One Road’ strategy. The Conference will feature in-depth discussions aimed at encouraging constructive dialogue, focusing on the emerging challenges and prospects for enhancing the role of Islamic finance in achieving the goals of the ambitious Chinese initiative. Dubai’s expertise in developing the Islamic economy into a comprehensive system and a key driver for international development will also be under the spotlight.

As a continuation of its achievements in supporting the Islamic economy, the Dubai Islamic Banking and Finance Center, which belongs to HBMSU, recently hosted a delegation of MBA students at the University of China's Xinjiang University of Finance and Economics. The first such visit for the UAE's university explored opportunities for cooperation in academic fields and Islamic economic research between Dubai and China. The move underscores the high level of confidence that the countries of the world place in the Emirate of Dubai and the UAE as a global model for leading the Islamic economy.

The continuing success of the Conference underscores the active role played by Dubai and the UAE in accelerating regional and international development, while contributing significantly to the revitalization of the Silk Road connecting Asia and Europe, in line with the ambitious Chinese ‘One Belt, One Road’ initiative. As China expands its economic influence in the Middle East, Islamic finance continues to gain more prominence in China, opening the door for Chinese companies to capitalize on Islamic Finance capital markets.