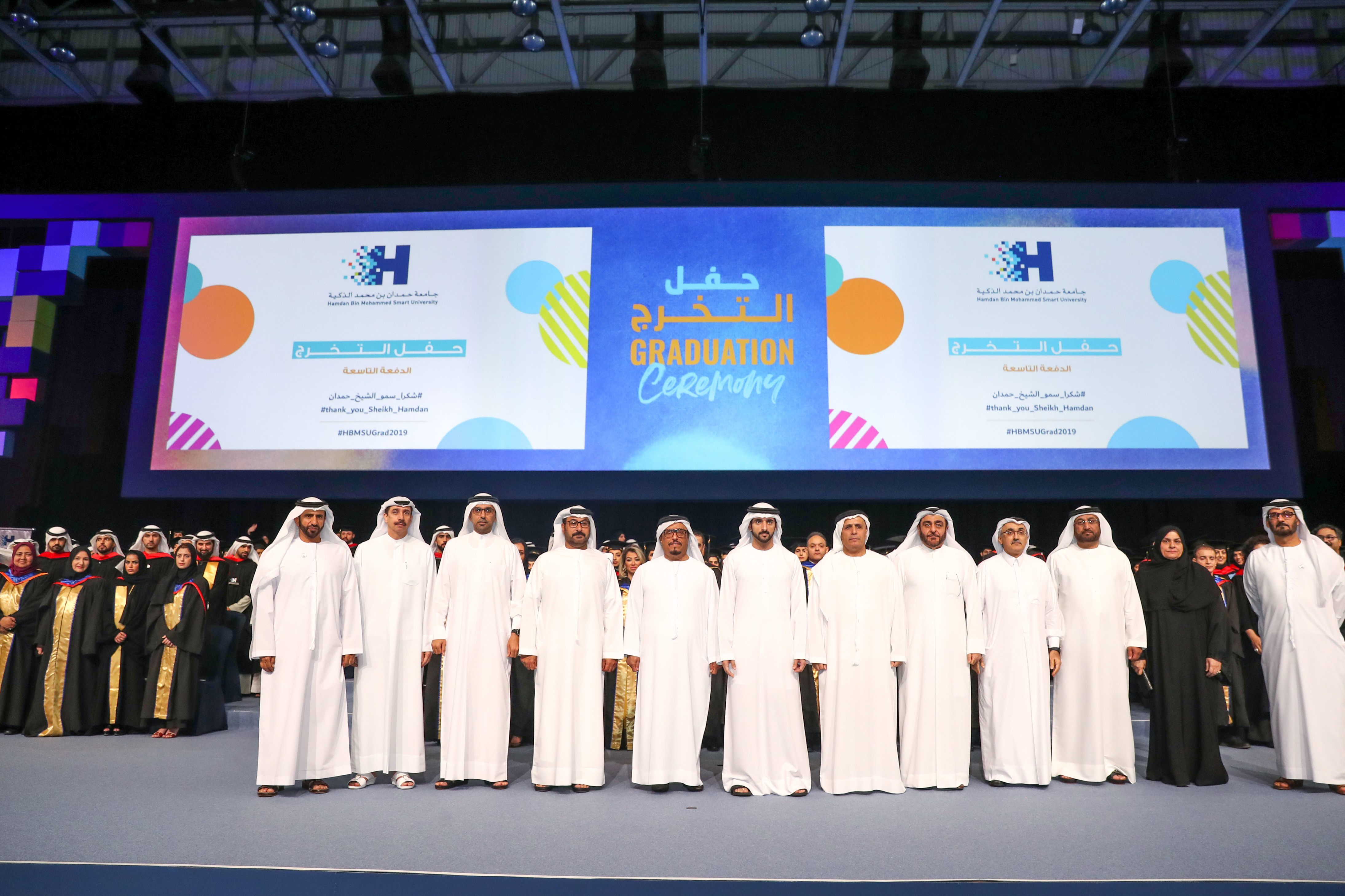 During the ceremony, H.H. Sheikh Hamdan bin Mohammed bin Rashid Al Maktoum was briefed about several initiatives that the university has launched, including the use of Blockchain technology, which allows graduates to share academic certificates and degrees through social networking platforms, the academic and professional community, friends and family--at any time and place. His Highness was also briefed about the ‘Smart educational file’ initiative, which will see the development of a central educational file for every citizen. He was also briefed on the ‘Free Zone’ initiative, which serves as a cornerstone for the achievement of the sixth article of the ‘50-Year Charter,’ an initiative that looks towards transforming universities into economic and creative free zones--a culmination of the vision adopted by HBMSU to create entrepreneur graduates rather than job seekers.

The ceremony began with singing of the national anthem and reciting of verses from the Holy Quran. Dr. Mansoor Al Awar, Chancellor of HBMSU, delivered a speech welcoming the Crown Prince of Dubai and the audience to the event.

In his speech, Dr. Mansoor said: “This year's graduation ceremony coincides with two special occasions for us—the first being the 50th anniversary of H.H. Sheikh Mohammed bin Rashid Al Maktoum, Vice President and Prime Minister of the UAE and Ruler of Dubai, in taking the first responsibility of His Highness at the service of this nation and the second occasion is the tenth anniversary of H.H, Sheikh Hamdan bin Mohammed bin Rashid Al Maktoum being named as the honorary president of the University.”

Dr. Al Awar added: “The establishment of HBMSU was a turning point in the history of higher education, paving the way for education to a new path. The declaration of the ‘Fifty-Year Charter’ recently was a source of pride and encouragement to us for several reasons. First, the university was and still is the first to move away from traditional concepts of learning followed for centuries. It highlighted the importance of differences, characteristics and the personal preparation of the learner in drawing the course of his education.

The ceremony also featured several graduates from Arab and Asian countries giving video messages where they expressed their pride in graduating from the HBMSU and the scientific and academic qualification they have achieved during their study at the known academic institution-- honing their personal skills according to their specialization and overcoming the challenges of the future. The graduates lauded the university's thrust towards excellence, especially in terms of smart and continuous distance education and the grants bestowed by H.H. Sheikh Hamdan Bin Mohammed Bin Rashid Al Maktoum for outstanding learners. One of the highlights of the video presentation was the reading of a poem from graduate Noura Ashour from the State of Kuwait.

H.H. the Crown Prince of Dubai and H.E. Eng. Hussain Ibrahim Al Hammadi, Minister of Education for the UAE; accompanied by several dignitaries like H.E Lieutenant General Dhahi Khalfan Tamim, Deputy Chairman of Police and General Security in Dubai and Chairman of HBMSU’s Board of Governors (BOG) and Dr. Mansoor Al Awar, Chancellor of the University, led the ceremonial and first-of-its-kind distribution of the graduation certifications using blockchain technology to 222 learners coming from the School of Business and Quality Management, School of e-Education and School of Health and Environmental Studies. 107 candidates were conferred with masteral degrees and 115 candidates received their bachelor’s degree. A group photo has been taken for H.H. along with the graduates and members of the University's Board of Governors.