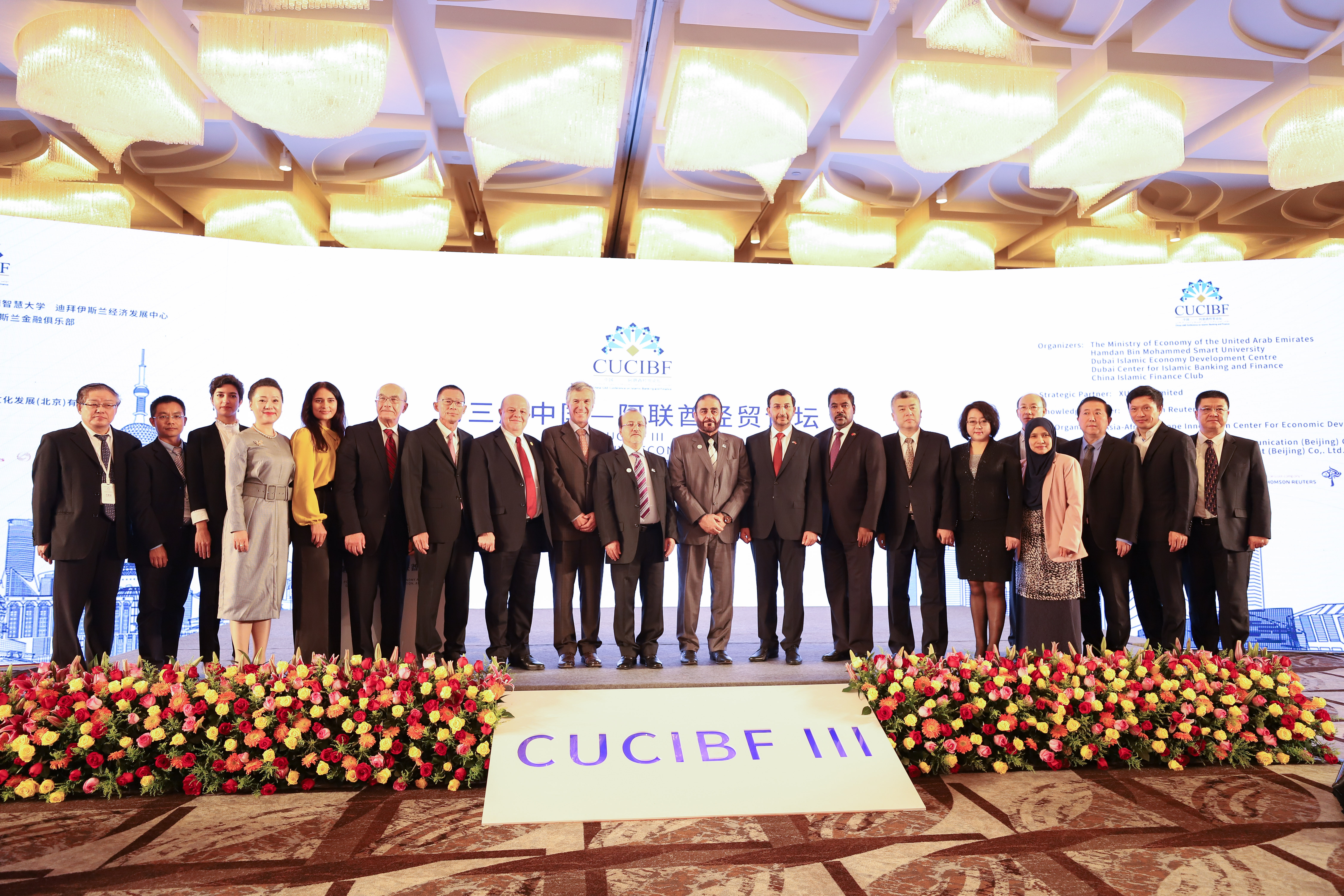 China , November 12 2018 – The third China-UAE conference on Islamic Banking and Finance (CUCIBF III) concluded last week in Shanghai, China, with the participation of leading economic experts, bankers, decision and policy makers, investors and Islamic economic stakeholders, who hailed Dubai's great strides in becoming a global capital of the Islamic economy. The conference featured a series of in-depth discussions on the prospects of the participatory economy and the financial system from the perspective of growth, development and integration, highlighting the importance of joint efforts between the UAE and China to meet the emerging challenges, to enhance the role of Islamic finance in achieving the objectives of the ‘One Belt, One Road’ initiative. The event attracted significant attention as a result of collaboration between the UAE Ministry of Economy, Dubai Center for Islamic Banking and Finance of Hamdan Bin Mohammed Smart University (HBMSU), Dubai Islamic Economy Development Center, China Islamic Finance Club, and the ZhiShang Inter-culture Communication, with the participation of Thomson Reuters as a knowledge partner.

The two-day forum focused on the present and the future of Islamic finance in the UAE and China, with a focus on China's growing economic impact in the Middle East. The session ‘Blockchain Technologies: Opportunities and Challenges in the Participatory Economy’ as part of the panel discussion that also explored the potential of international capital cooperation in private and public sector partnerships and ways to utilize it, highlighting the need for joint financial openness and international strategic alliances in education. Another roundtable session titled ‘Sukuk and Economic Development: Opportunities and Challenges’ discussed the challenges and opportunities to enhance the contribution of Islamic finance tools to the success of the Belt and Road initiative.

H.E Abdulla Al Saleh, Under-Secretary of the Ministry of Economy for Foreign Trade and Industry, said that the third edition of China-UAE Conference on Islamic Banking and Finance, in conjunction with the official visit of the UAE delegation to China, further strengthens the close relations between the two friendly countries and adds new momentum to the growth of bilateral trade, joint ventures and investment flows. He added that China continues to strengthen its position as the UAE's first trading partner in the non-oil sectors, highlighting the shared interest in applying the Islamic economy model to achieve the objectives of the Belt and Road initiative. This will stimulate and guide the economy to serve the sustainable development goals, underscoring the UAE’s and China’s roles as influential forces on the regional and global economic map.

He added: “The conference comes at a strategic time when economic relations between the UAE and China are growing stronger, reflected by the rise of non-oil trade in 2017 to USD 53.3 billion, a growth of 15 percent YoY and 10 percent over the past five years. Last year witnessed remarkable progress in terms of trade and economic relations. The UAE accounted for 30 percent of China's total exports to Arab countries and 22 percent of the total Arab-Chinese trade. The discussions were extremely fruitful and focused on ways to overcome the current and emerging challenges facing the Islamic finance sector. These sessions highlighted the UAE’S pioneering experience in developing the Islamic economy, with the unlimited support from wise leadership, while also enabling Chinese companies to access investment and learning opportunities, education and knowledge related to the Islamic economy. We look forward to building bridges with our counterparts in China to develop strategies and frameworks that further strengthen the Islamic economy, which is expected to grow at an annual rate of 8 percent to reach USD 3 trillion by 2023, globally.”

Dr. Mansoor Al Awar, Chancellor of HBMSU, emphasized the importance of the conference’s third edition as a true reflection of the strong relationship between China and the UAE, pointing out that it is a great step towards strengthening the strong economic ties between the two countries. This is further underscored by the historic visits made by His Highness Sheikh Mohammed bin Zayed Al Nahyan, Crown Prince of Abu Dhabi and Deputy Supreme Commander of the UAE Armed Forces; and the Chinese President Xi Jinping, who agreed to establish a comprehensive strategic partnership and to deepen cooperation within the Belt and Road initiative to achieve shared goals. Al Awar expressed his happiness in the success of strategic discussions, which reflected the concerted efforts of the UAE and China in supporting the global Islamic economy, which is currently experiencing an accelerated annual growth rate of 8 per cent, reinforcing its role as one of the key sectors of the future.

He added: “We are honored to host an international forum, the first of its kind in the UAE and China in the field of global Islamic economy, inspired by the directives of H.H Sheikh Hamdan bin Mohammed bin Rashid Al Maktoum, , Crown Prince of Dubai, Chairman of the Executive Council and General Supervisor of ‘Dubai The Capital of the Islamic Economy’ strategy, who said: “We look forward to effective dialogues on the alternatives needed to promote the growth of the Islamic economy and to explore the opportunities that support sustainability from a global perspective.” The event provided an ideal platform to highlight the competitiveness of the UAE in playing a pivotal role in the achievement of the Belt and Road initiative’s objectives. Its position as a link that connects the East to the West, and as an important center for the re-export of Chinese imports to the world, particularly Africa and Europe, supported by infrastructure, sophisticated economic growth and a vibrant cultural environment play key roles in this.”

Al Awar concluded: “The third edition of the forum was an ideal platform to discuss the opportunities arising from the expansion of China's economic influence in the Middle East, which will drive the growth of Islamic finance in the Chinese market. This was held at a time when the Islamic finance sector is attracting unprecedented global attention as an integrated system that provides innovative and supportive models for economic growth, based on feasible alternatives of investing in the traditional financial system, which have been strongly affected by the global financial crisis. It also strengthens the UAE-China relations in the banking and finance sector, which has more than 1,000 institutions in 75 countries around the world, as part of our confidence in the prospects of both countries, with unlimited government support to invest in new sectors that will mark the beginning of a new phase of growth, sustainability and prosperity."

The opening of the conference was followed by the signing of two strategic agreements, the first between the ‘ZhongGuanCun the Belt and Road Industrial Promotion Association (ZBRA);’ the China Islamic Finance Club (CIFC); and Xunlei Limited to promote cooperation between China and the UAE in innovation and entrepreneurship research, education, training, artificial intelligence and Blockchain technology, sustainable development and exploring new horizons to promote innovation in environmentally friendly technology in the future. The agreement was signed by Chin Lee, CEO of XunLei Limited, China; Zhang Xiaodong, president of Zhongguancun the Belt and Road Industrial Promotion Association, China; Huang Lei, CEO of China Islamic Finance Club; and Professor Nabil Baydoun, Vice Chancellor for Academic Affairs, HBMSU. All parties highlighted the need to promote international innovation for young people and entrepreneurs under the joint agreement. The partnership establishes solid foundations for promoting dialogue, communication and cooperation between countries to support innovation, leadership spirit and excellence and building the capacities of young people in the world, in line with the requirements of the twenty-first century.

The Shanghai Overseas Education Exchange Center and the China Islamic Finance Club (CIFC) signed another agreement to explore the prospects for cooperation in education and student exchange to support the Belt and Road initiative, through the development of human capital in the participatory economy, providing education, training, research and development and dissemination of international best practices using virtual learning environment and lifelong learning approach. The agreement was signed by Zhang Minhua, Director of the Shanghai Overseas Education Exchange Center; Huang Lei, CEO of China Islamic Finance Club; and Professor Nabil Baydoun. Both parties emphasized their commitments to facilitate the exchange of faculty and students, exchange of knowledge, experience and best practices, through organizing conferences and interactive workshops.

Professor Nabil Baydoun, Vice Chancellor for Academic Affairs of HBMSU, said: “The third China-UAE conference on Islamic Banking and Finance has once again established itself as an important international forum to explore the future of the participatory economy by taking advantage of the leading position of the UAE and China with a focus on unifying joint efforts to drive the growth of the assets of the global Islamic finance industry, which is expected to reach USD 4 trillion by 2020. The outcome of the event was equally ambitious, as it resulted in the creation of strategic partnerships and the establishment of a clear roadmap to advance the growth of the Islamic economic system based on the optimal investment in education, training, development and research, which are all important components in building a human capital with technical expertise, knowledge and practical skills to direct the economy towards new levels of excellence, growth and leadership. We look forward to utilizing our expertise at Hamdan Bin Mohammed Smart University in serving international efforts to improve the state of Islamic banking and finance, with a focus on knowledge, science and strong will to envision the future of the economy and to enhance Dubai’s position as the world capital of the Islamic economy.”

HBMSU’s Dubai Center for Islamic Banking and Finance held two-panel discussions on the sidelines of the third China-UAE Conference on Islamic Banking and Finance. The first, titled ‘Addressing Funding Challenges in the Next Phase of One Belt and One Road Initiative’ saw Prof. Nabil discuss the opportunities provided by Islamic finance in bridging the financing gap within One Belt and One Road initiative. He highlighted the impact of this initiative on many countries and their importance in establishing projects to benefit from capital markets for Islamic finance. During the session titled ‘Challenges and Opportunities of Islamic Banking,’ participants discussed challenges and opportunities for the Islamic finance industry and traditional financing problems, in addition to the use of FinTech in the shift to Islamic Finance 2.0 to attract participation during real risk and profit to low income and medium income communities, under the supervision of Khalid Howladar, Managing Director, Acreditus Dubai.

The third China-UAE Conference on Islamic Banking and Finance’s agenda was filled with discussions and fruitful dialogues on key issues affecting the Islamic finance sector. The sessions also highlighted the opportunities that are available for the public and private sectors to build strong partnerships that support the growth of the Islamic economy, thereby contributing to the success of the Belt and Road initiative. 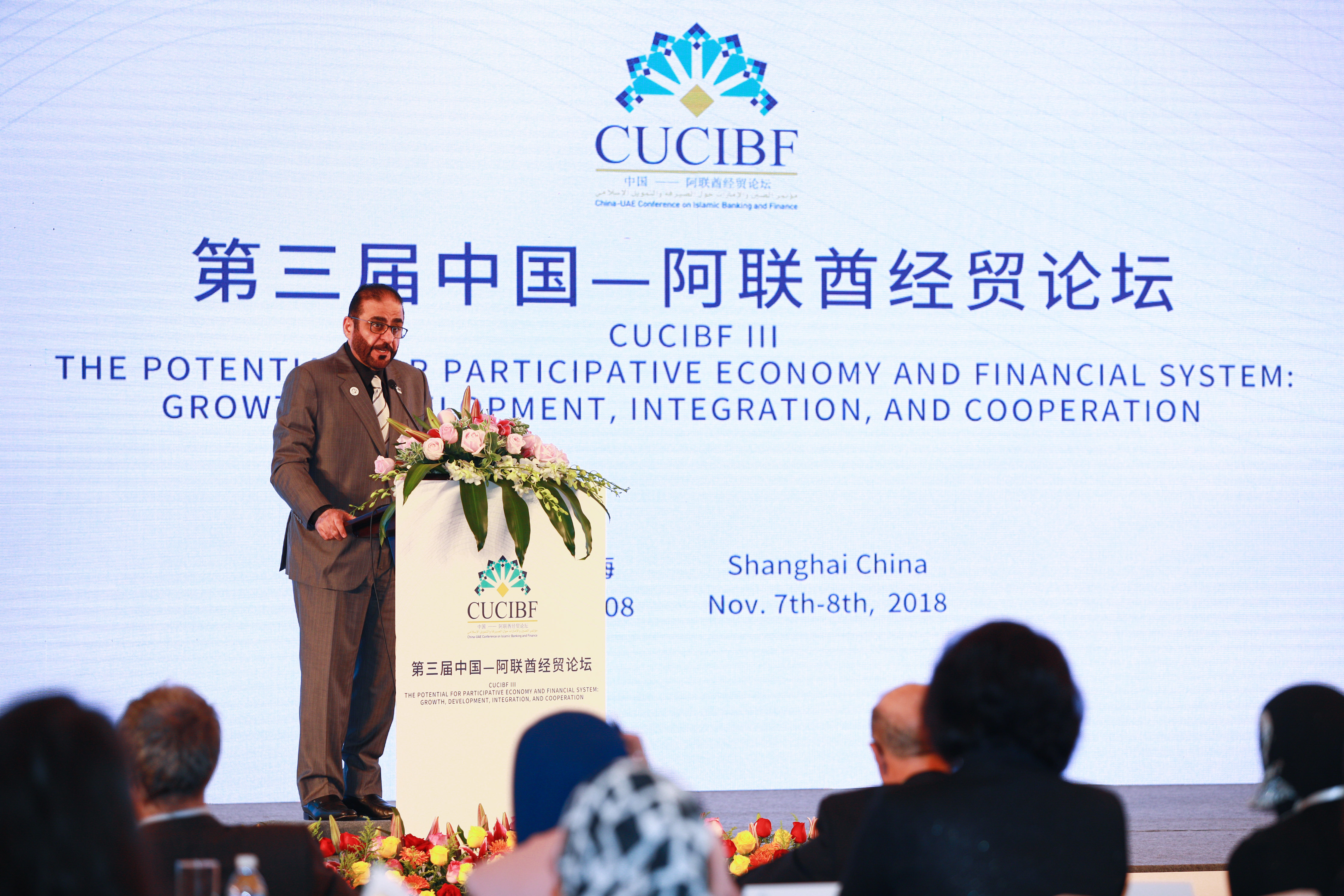 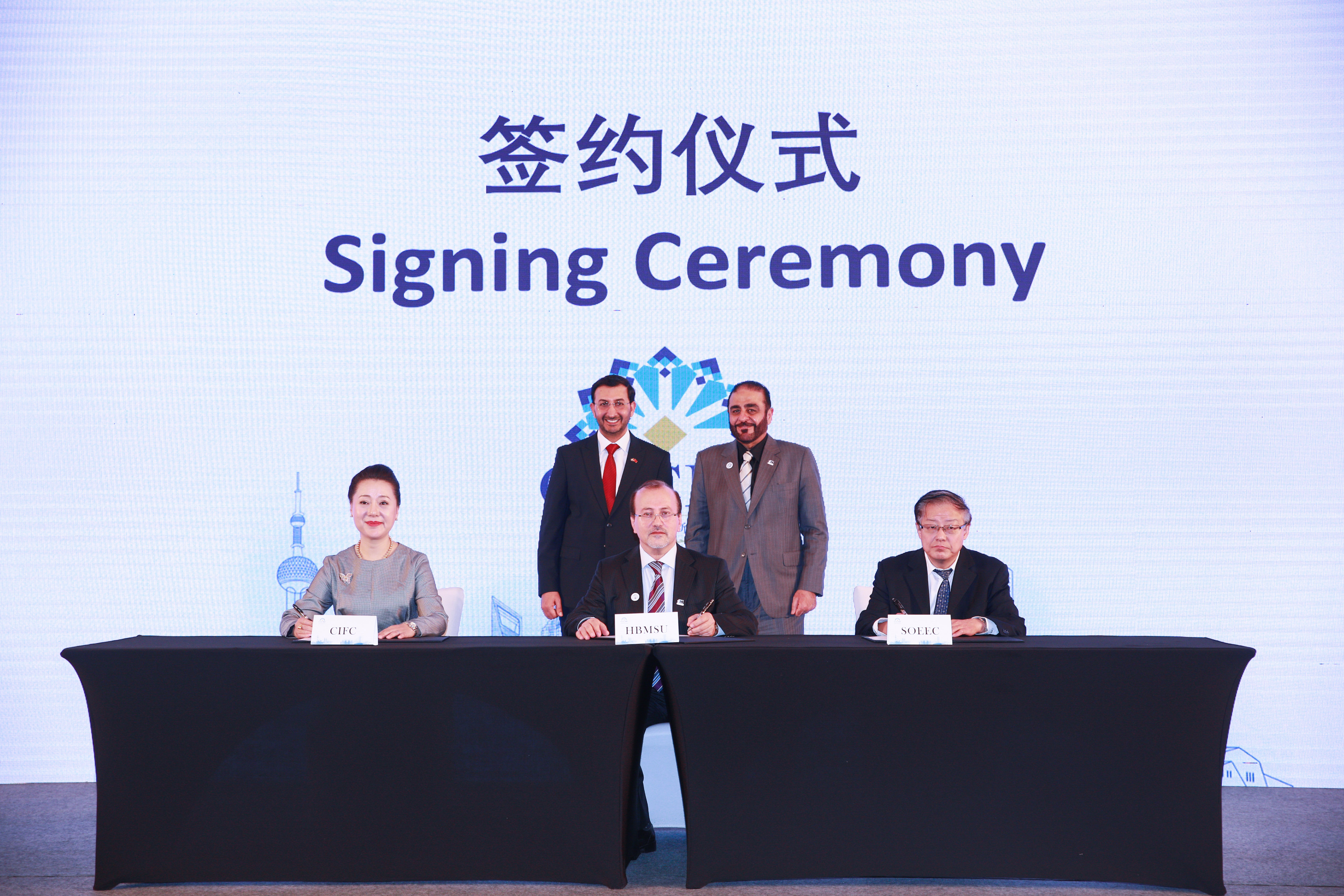 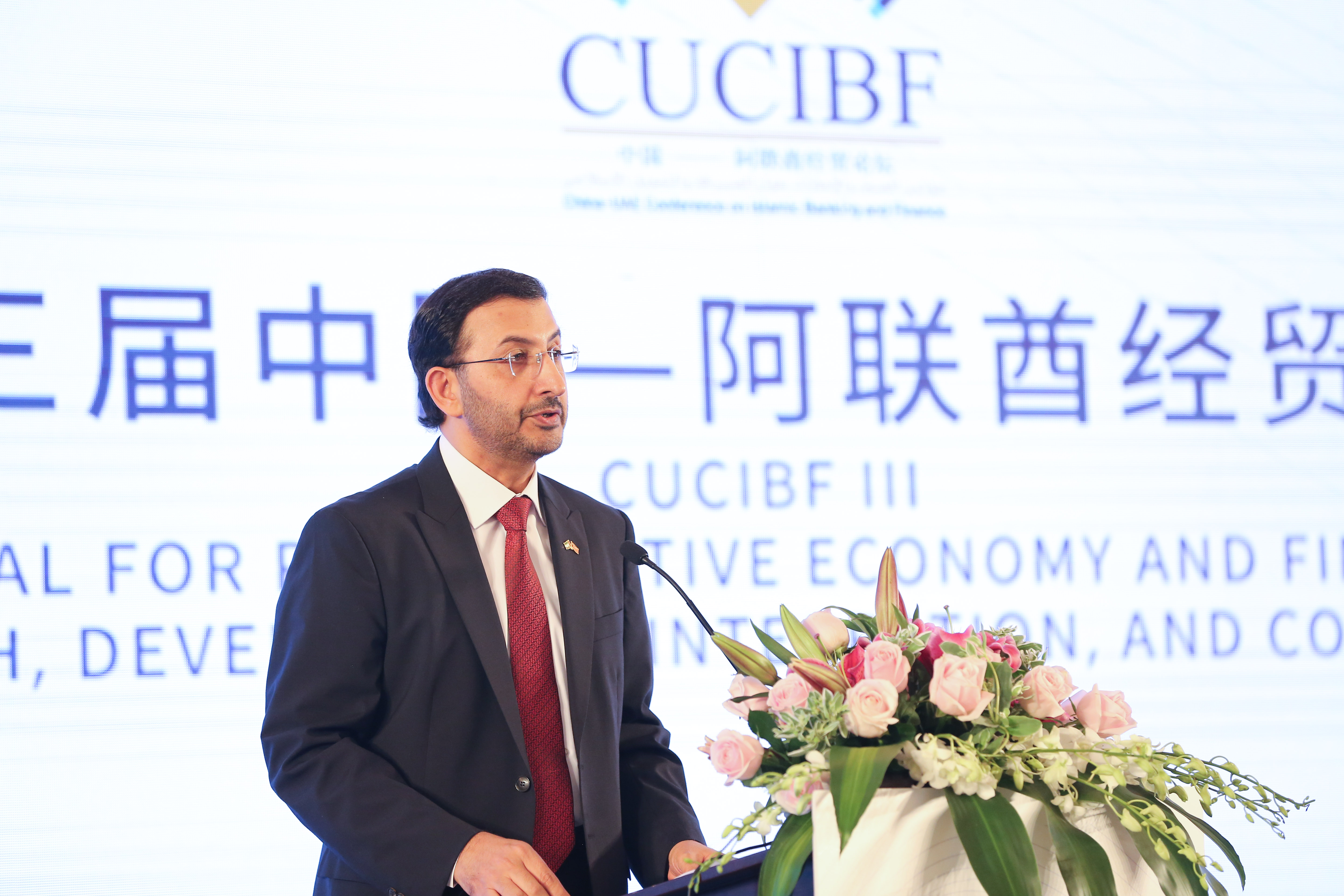