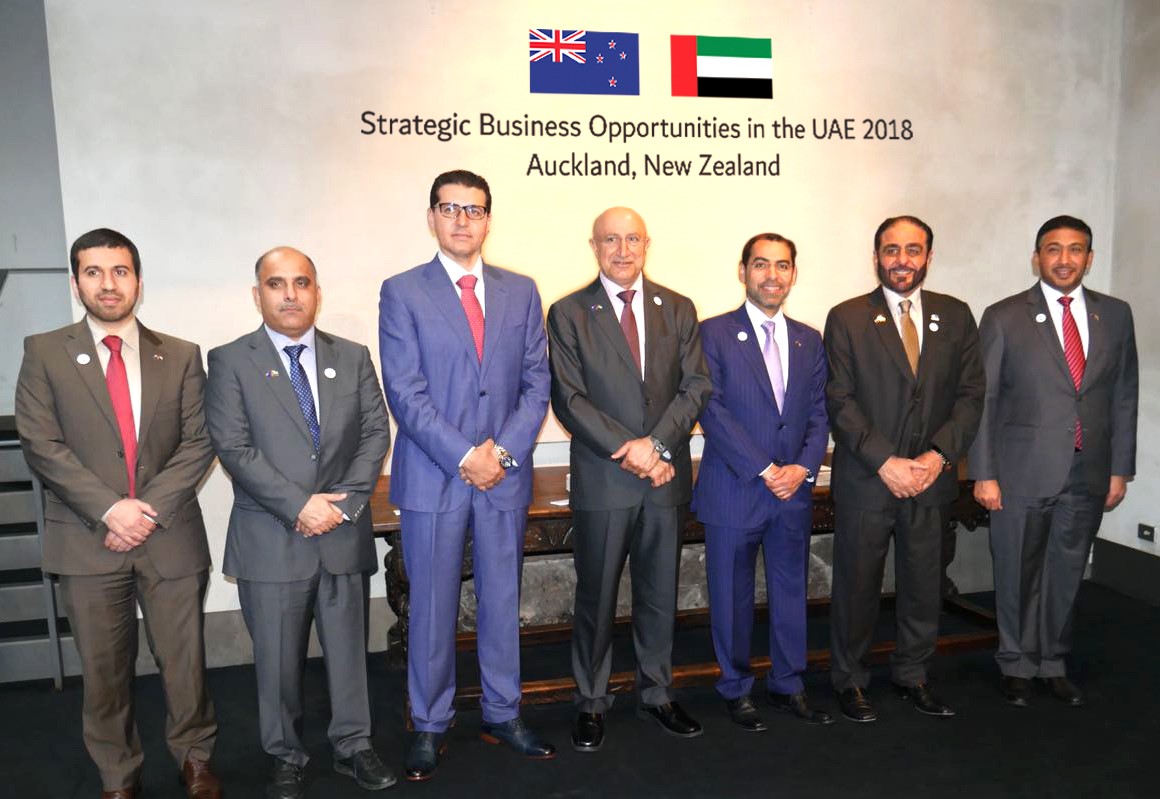 Dubai – 12 August, 2018: The Embassy of the United Arab Emirates in New Zealand has organized the first Strategic Business Opportunities Forum in Auckland, New Zealand, in cooperation with New Zealand Middle East Business Council (NZMEBC) and INDEX Conferences and Exhibitions – a member of INDEX Holding, supported by Hamdan Bin Mohammed Smart University and Khalifa Empowerment Program "Aqdar", where they discussed business opportunities in the UAE and ways to bolster trade and investment ties between the two countries.

On the New Zealand side, the meeting was attended by Murray McCully, former Minister of Foreign Affairs, New Zealand and Honorary Member of NZMEBC, His Excellency Saleh Al Suwaidi, the UAE Ambassador to New Zealand, Caroline Bilkey, Assistant Secretary for the Ministry of Foreign Affairs and Auckland Group Director and Stewart Germann, Chairman of NZMEBC, as well as a number of government and private sector representatives and an elite group of industry professionals and businessmen in New Zealand.

While the UAE side was represented by Dr. Mansoor Al Awar, Chancellor of Hamdan Bin Mohammed Smart University (HBMSU), Chairman of the Governing Board of the UNESCO Institute for Information Technologies in Education (IITE), Doctor Expert Ibrahim Al Dabal, General Coordinator of Aqdar World Summit and Dr. Abdul Salam Al Madani, Chairman of INDEX Holding and Executive Chairman of Innovation Arabia and Aqdar World Summit, as well as a number of officials and heads of delegations.

On this occasion, Murray McCully, the former Minister of Foreign Affairs for New Zealand and the Honorary Member of NZMEBC, delivered a welcoming speech in which he expressed his appreciation for the organization of this forum and praised the strong political and economic relationships between the United Arab Emirates and New Zealand.

On his part, H.E. Saleh Al Suwaidi, the UAE Ambassador to New Zealand, said: "I would like to thank INDEX Conferences and Exhibitions for organizing this unique strategic business opportunities forum and seize the opportunity to invite companies from different sectors in New Zealand to participate in the prestigious events organized by INDEX Conferences and Exhibitions in Abu Dhabi and Dubai. I am also very pleased with the participation of Dr. Mansour Al Awar, Chancellor of Hamdan Bin Mohammed Smart University (HBMSU), who briefed us about Innovation Arabia 12 conference and exhibition in Dubai and Doctor Expert Ibrahim Al Dabal, General Coordinator of Aqdar World Summit, AWS, for his presentation about the importance of this international Summit, which is held in partnership with Khalifa Empowerment Program "Aqdar" and supported by UAE Ministry of Interior. I would also like to thank Dr. Abdul Salam Al Madani, Chairman of INDEX Holding and Executive Chairman of Innovation Arabia and Aqdar World Summit for his efforts in organizing such events of immense importance.”

H.E. Saleh Al Suwaidi also praised the strategic trade relations between the UAE and New Zealand, who revealed that the trade volume between the two countries amounted to 2.9 billion New Zealand dollars. He also pointed out that the UAE is one of the most important trading partners to New Zealand as it comes in the 9th place among all its partners where it serves as a re-export an and transit hub for the MENA region. He also said that the multiple visits of senior officials from both countries helped to strengthen this unique relationship; especially the visit of the H.H. Sheikh Abdullah bin Zayed Al Nahyan, the UAE Minister of Foreign Affairs, to New Zealand in May, this year, which was helped in promoting the relations between the two countries and strengthened the UAE's position as a major gateway to businesses from all over the word.

"The New Zealand government has allocated 140 million dirhams to its pavilion at Expo 2020, demonstrating New Zealand's keenness to develop and strengthen trade and investment ties between the two countries," Al Suwaidi added.

From her side, Caroline Bilkey, Assistant Secretary for the Ministry of Foreign Affairs and the Auckland Group Director, said: "New Zealand political and economical links with the UAE are as strong as they have ever been. The bilateral relationship is hugely important to New Zealand, so we aim to continue to work together across a range of sectors to further strengthen these ties.”

Commenting on this event, Stewart German, Chairman of NZMEBC, said “It is a pleasure for New Zealand Business Council to once again collaborate with the Embassy of the UAE on this event. Our aim at the NZMEBC is to prompt and assist the development of business relationship between the two nations, and I am very pleased to witness the increased activities between the UAE and New Zealand in the recent years.”

Speaking about Innovation Arabia 12 Conference and Exhibition, Dr. Mansoor Al Awar said: “Held under the patronage of HH Sheikh Hamdan Bin Mohammed Bin Rashid Al Maktoum, Crown Prince of Dubai and President of HBMSU, with the theme ‘Building Smart Communities: Balancing Innovation, Change and Transformation’, Innovation Arabia 12 represents an outstanding event in both the scientific and academic fields in view of its focus on the following four tracks: Quality and Business Management, Smart Learning, Health and Environment, and Artificial Intelligence. The Conference expresses the University's commitment to generate and share research, collaborative projects, best practices, and success stories in all related fields. The international Conference helps generate new creative ideas that promote sustainable development and make a difference by harnessing innovation for the best interest of the community."

Doctor Expert Ibrahim Al Dabal, General Coordinator of Aqdar World Summit, said: "Aqdar World Summit is considered an international platform that aims to develop sustainable societies, empower individuals, and support important initiatives and empowerment programs that benefit communities in order to achieve its goal of “Nourishing Minds, Flourishing Nations”. The summit brings together leaders, decision-makers, experts, and leading companies across all fields to share their recommendations that will, with no doubt, have positive impact on the community.”

On his part, Dr. Abdul Salam Al Madani, Chairman of INDEX Holding and Executive Chairman of Aqdar World Summit and Innovation Arabia said, " On behalf of the organizing committee, it gives me great pleasure to welcome all the reputed companies and industries based in New Zealand and encourage them to actively participate in our premier global events being held in the UAE. As ‘sustainable development’ is now a global necessity and a key trending topic for both the UAE and New Zealand, the two events, aim to highlight the key issues and concerns related to achieving sustainable growth and building a knowledge-based economy while at the same time reflecting the needs and challenges of younger generations across the globe. I strongly urge the leading local and international companies in New Zealand to take advantage of these platforms and showcase their latest technologies and seek business expansion opportunities in the UAE, which has truly established itself as a key gateway to the growing markets in the Middle East and North Africa region.

At the conclusion, Murray McCully, former Minister of Foreign Affairs, Honorary Member of NZMEBC, thanked all the attendees and participants and praised the role of the United Arab Emirates and its efforts to spread security, safety, tolerance and stability in many countries in the region.