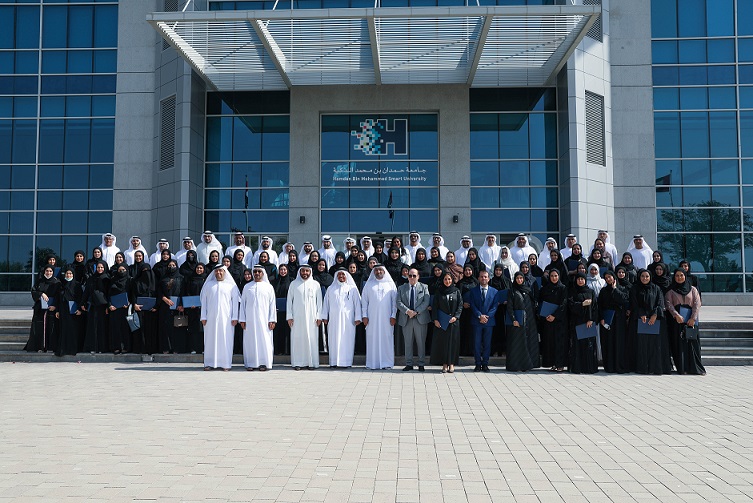 In the presence and under the patronage of His Excellency Lieutenant General Dhahi Khalfan Tamim, Deputy Chairman of Police and General Security in Dubai and Chairman of HBMSU’s Board of Governors, Hamdan Bin Mohammed Smart University celebrated the graduation of nine cohorts of learners who completed the Professional Diploma: International Leaders being administered by HBMSU in partnership with the United Nations Institute for Training and Research (UNITAR).

The program aims to provide qualification to individuals who will form part of the new generation of leaders that will represent the UAE in international platforms. It is also in line with the UAE Soft Power Strategy which seeks to cement the UAE’s position as an economic, cultural, humanitarian, and civilian influence. A total of 150 graduates attended the ceremony recently held at campus in the presence of HE Lt Gen Dhahi Khalfan Tamim and HE Dr. Mansoor Al Awar, along with members of academics and administration, and UNITAR representatives who joined virtually during the ceremony.

HBMSU has been commended for this pioneering effort and its successes in building international partnerships, including developing sustainable programs and policies with regional and global impact, in line with the vision of the UAE’s wise leadership.

During the ceremony, HBMSU also announced a new edition of the program that will focus on creating influencing leaders. This move is the latest addition to the initiative’s continued success in providing integrated training and knowledge platform for future leaders. The program covers in-depth insights into the latest trends in global affairs, including social, economic, and diplomatic perspectives, which aim to empower learners as they play a pivotal role in achieving the UAE’s national goal of cementing its position as one of the most tolerant and open countries in the world and foster cultural, humanitarian, and international relations.

HH Lieutenant General Dhahi Khalfan congratulated the new graduates on completing the program that prepares leaders who would uphold the UAE’s position as a global role model in promoting cultural openness and civilizations. He called on the graduates to continue the leading accomplishments and act as effective international leaders in various fields, be it government, media, academe, or business profession.

H.E added: “The nine cohorts of graduates for the Professional Diploma: International Leaders is a testament to the success of the university’s efforts to lay the foundations of knowledge and innovation and instil the spirit of leadership and excellence among the young generation. This also complements the university’s pivotal role as a pioneering scientific and knowledge hub in preparing future leaders. We highly value our successful partnership with UNITAR which reflects the confidence of the international academic community in our ability to develop academic and training programs focused on strengthening leadership skills. This comes in line with the insightful vision of His Highness Sheikh Mohammed bin Rashid Al Maktoum, Vice President and Prime Minister of the UAE, and Ruler of Dubai.

H.E. Dr. Mansoor Al Awar said: “We are honored to celebrate the graduation of nine cohorts of distinguished learners, and we consider them as the results of the principles that we adopt at Hamdan Bin Mohammed Smart University. This principle drives us to enable young talents to compete globally and equip them with the necessary skills and knowledge to be ambassadors and contributors representing the UAE in international fora. We are guided by the wise directives of H.H. Sheikh Hamdan bin Mohammed bin Rashid Al Maktoum, Crown Prince of Dubai and HBMSU President in investing in the skills and talents of the young generation.”

Al Awar added: “HBMSU reaffirms its commitment to adopting all the policies that support our core values which include developing specialized skills for learners. This is the foundation to preparing qualified youth which can lead and help the nation achieve sustainable development in the next fifty years.”

The Professional Diploma: International Leaders program is centred on developing a network of international relations experts that would represent and help enhance the country’s position and reputation. Further, it aims to help build international capabilities in key areas such as a foreign policy. It is also designed to help graduates identify the best ways to use the ‘Soft Power Strategy’ as a tool for foreign policy.

The program covered seven modules, four of which were taught in Dubai by HBMSU while three were conducted in Geneva, Switzerland by UNITAR. The seven modules comprise future strategic leaders, diplomatic protocol and ethics, the art of diplomatic communication, international cooperation, diplomacy, international affairs, public speaking, as well as media and conflict resolution.