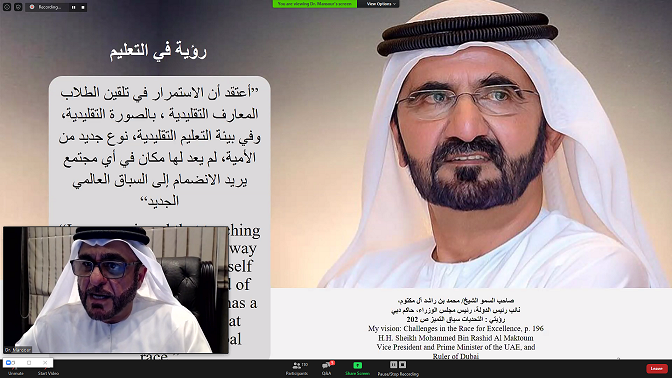 Dr. Mansoor Al Awar, Chancellor, Hamdan Bin Mohammed Smart University (HBMSU), has highlighted the need for continuous efforts to tap innovation, quality and excellence as the key foundations to re-engineer the future of higher education and create a new generation of graduates who are qualified to lead in the 21st century. The call was raised during Dr. Al Awar’s participation in a webinar session of the Electronic Ramadan Quality Council held with leading quality and excellence experts from the Arab region in line with virtual meetings being organized by the Saudi Quality Council using the videoconferencing platform Zoom.

The HBMSU's presence at the meeting reflected its support to the initiatives of the Saudi Quality Council, as well as its constant efforts to share and disseminate its leading experiences as the first hub for smart learning in the Arab region and pioneering provider of quality education based on the smart learning model. HBMSU’s endeavours support international efforts to deliver equitable and comprehensive quality education and the enhancement of lifelong learning opportunities for everyone.

During the session, Dr. Al Awar gave a presentation themed, 'Innovation in Higher Education,' and talked about the importance of making a fundamental shift in planning, methodologies, and educational environments, and moving away from traditional models of education, to support societies in gaining competitive advantage and keep pace with global development.

The Chancellor also threw the spotlight on HBMSU's experience in using innovation, creativity, technology, and scientific research to change the face of higher education. Al Awar shared that the success of these endeavours has played a significant role in HBMSU's objective of creating a new generation of knowledge ambassadors, entrepreneurs, innovators, and future leaders, and not simply become graduates or job seekers. He added that these efforts are inspired by the UAE’s leadership which is currently taking advanced steps to become one of the most innovative countries in the world.

Al Awar discussed the concept of innovation and its main elements, explaining methods to polarize innovation on higher education institutions via the development of strategic plans, scientific content, educational environment, including faculty members and learners. He revealed that the university, which is under the guidance of His Highness (H.H.) Sheikh Hamdan Bin Mohammed Bin Rashid Al Maktoum, Crown Prince of Dubai and University’s President, has successfully transformed itself into becoming a unique model for higher education, a move that can be attributed to its strategic adoption of methodologies in creative research, development, critical thinking, innovation incubation and adoption of the latest learning methods in all academic courses.

The HBMSU has also presented many innovative projects of its learners and other universities' learners which were presented to the international community during ‘Innovation Arabia’ Conferences. The smart university has made major efforts to attract leading partners from the private sector to establish creative learner laboratories that produce creative graduates capable of becoming technology designers and producers rather than mere consumers.

The HBMSU Chancellor highlighted the importance of innovation in the move to enhance competitiveness among higher educational institutions, which represents a major change towards enhancing learning ratios and university ecosystem, as well as improving learner’s ability to imagine and adapt. He also shared that innovation serves as a great transformation tool in promoting integrated education, which is based on the participation of learners in the educational process as knowledge makers and not only usual recipients. In addition, it also helps enable academics to become facilitators for learning rather than teachers.

Al Awar noted that HBMSU's leading position is the result of its successful adoption of a comprehensive methodology that puts learners at the top of its strategic priorities, as well as relying on fundamental pillars such as being game changer, passionate for results, and fuelling innovation and entrepreneurship.

He also spoke about some of HBMSU's recent achievements, including the success of its online courses, 'Be an online tutor in 24 hours' and 'How to design an online course in 24 hours', which received overwhelming response from the global community after being launched and made available in five languages. The courses attracted the participation of around 111,000 individuals from 84 countries. Al Awar also discussed the success of HBMSU initiatives such as the 'Cloud Campus,' 'Smart Campus,' and 'Gamification' which represents the cornerstone of the university’s commitment to provide unique opportunities for lifelong learning and building unique experiences in creating future generations equipped with the applicable tools.