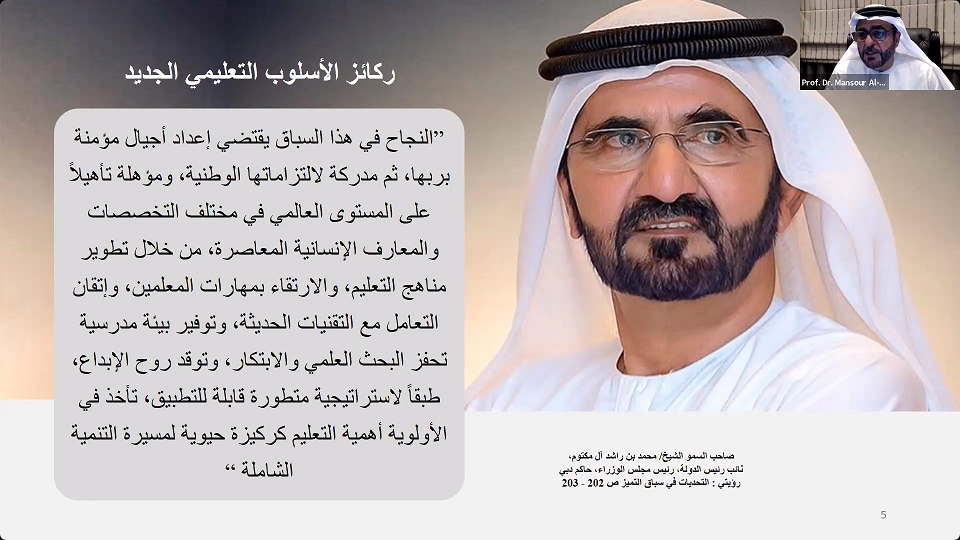 Dr. Mansoor Al-Awar, Chancellor of the Hamdan Bin Mohammed Smart University (HBMSU) emphasized the value of innovation and excellence in establishing the foundation of higher education as he discussed the pioneering experiences of HBMSU in becoming an internationally-recognized academic and knowledge institution. The university has become known for redefining the future of learning and education in line with the requirements of the 21st century by providing a unique model that aims to produce a new generation of graduates who are innovators, entrepreneurs, knowledge ambassadors, and future leaders rather than job seekers.

Al-Awar discussed the pillars of the new learning methods being adopted at HBMSU in line with the vision of His Highness Sheikh Mohammed bin Rashid Al Maktoum, Vice President and Prime Minister of the UAE and Ruler of Dubai, to create a new generation of highly qualified professionals capable of competing globally in various contemporary human disciplines and knowledge.

Al-Awar noted that HBMSU, with the constant guidance of H.H. Sheikh Hamdan bin Mohammed bin Rashid Al Maktoum, Crown Prince of Dubai and President of the University, has successfully established an entirely new educational model that places the learner at the center of strategic priorities, focusing on developing educational curricula and upgrading the skills of both learners and teachers, as well as providing an educational environment that stimulates excellence, scientific research, innovation and technological empowerment.

During the lecture, the Chancellor highlighted the necessity of adopting international best practices in excellence and quality to re-engineer the future of education and prepare generations that are academically, scientifically, innovatively, and creatively fit to compete in the global arena.

Al-Awar reviewed the concepts of innovation from multiple perspectives such as how to entrench the culture of innovation in higher education institutions to upgrade the learning environment away from the traditional model. He further advised to take advantage of HBMSU’s experiences in pioneering smart learning in the Arab world, which has been known for enhancing opportunities in distance education and lifelong learning through creativity- and innovation-led initiatives such as the “Smart Building”, “Smart Campus”, and “Gamification methodology”. These efforts represent an important contribution to youth building equipped with the knowledge, experience, and tools needed to compete globally.

He highlighted the results of HBMSU’s pioneering efforts to integrate innovation within the educational system, attaining major achievements that change the face of higher education based on innovation, creativity, technology and scientific research, further citing that these are in accordance with the directives of H.H. Sheikh Hamdan bin Mohammed bin Rashid Al Maktoum, to provide the best for future innovators and creators and build the capabilities of youth who are essential pillars in the drive towards development in all societies.

Dr. Al-Awar mentioned the importance of educating the academic community in the Arab world on how to achieve innovation in higher education institutions, stressing that innovation cannot be achieved without laying the foundations of excellence as the cornerstone for upgrading the capabilities of learners and academics to keep pace with the rapid developments taking place in the 21st century.

He added: "We are delighted to share with the higher education institutions in Egypt our accumulated experiences and our pioneering expertise in making innovation, excellence and quality the key foundations in improving the educational system to be the engine of development and growth. Our efforts are in line with the directives of H.H. Sheikh Hamdan bin Mohammed bin Rashid Al Maktoum to promote knowledge and invest in the youth as top priorities to ensure sustainable development.

He further explained the ways to encourage innovation in higher education institutions, foremost of which is to develop strategic plans, update science subjects, improve the learning environment, and empower the faculty and learners. He cited that HBMSU’s success also comes in modernizing learning methods in all academic courses and building on approaches such as creativity, research, development, critical thinking and the creation of innovation incubators and creative learner laboratories that have proven to be a great success in bringing about transformative and positive change in involving learners in the educational process. Learners are considered as real partners in the process of creating, disseminating, and transferring knowledge instead of recipients, while enabling academics to play a pivotal role as facilitators to learn in place of indoctrinated teachers, he added.

Al-Awar enumerated the types of innovation which comprise ‘radical’ innovation and ‘gradual’ innovation, mentioning that innovation is the outcome of creativity. He also noted the importance of some concepts such as positivity, modernity, technology, and problem solving in bringing educational institutions to new levels of competitiveness, excellence, and efficiency.

He also discussed the role of innovation in upgrading the competitive advantage of higher education institutions, especially in terms of improving the level of learning, the quality of the university environment, and integrating in education the ability to visualize, adapt, and constantly progress. He reviewed as well the success factors that made HBMSU a pioneering model for future universities, especially in adopting a forward-looking approach based on integrating technology, innovation, creativity, and scientific research, as well as focusing on pioneering change, a passion for results, and stimulating innovation and entrepreneurship.

The interactive sessions held electronically witnessed high-level participation from leading experts in the field of government excellence. Best practices related to the ‘Egypt Government Excellence Award’ were discussed, as well as an opportunity for ambassadors of excellence, representatives of major government agencies and Egyptian universities to direct questions to Dr. Mansoor and other participating experts to benefit from their experiences in various fields related to government excellence. 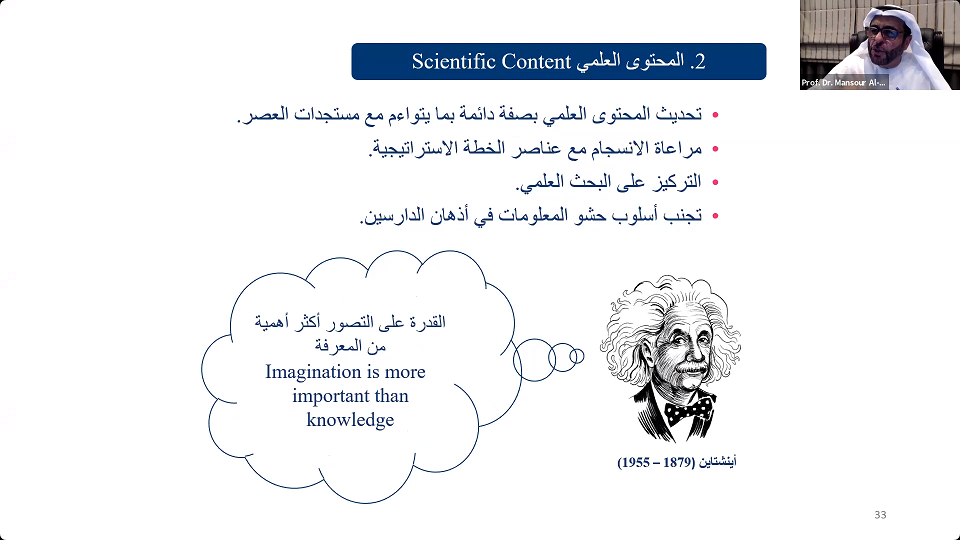