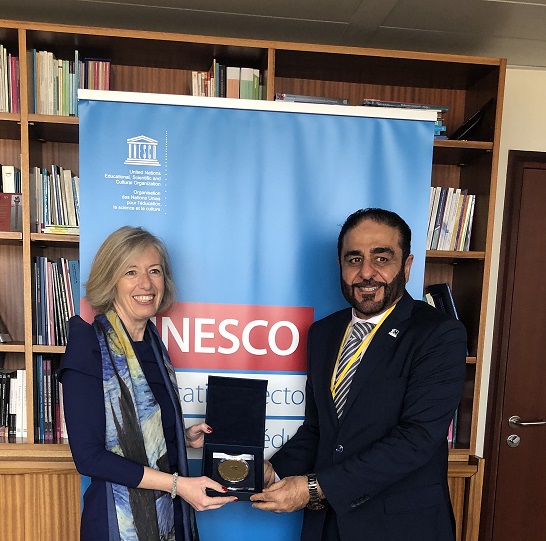 In an effort to share its pioneering experience with the world, the Hamdan Bin Mohammed Smart University (HBMSU), showcased its ‘Global Benchmarking Framework and Data Set for Online, Open, Smart and Technology-enhanced Higher Education’ during its participation in the UNESCO Mobile Learning Week 2019, held recently in Paris. The world’s leading initiative garnered wide international acclaim for creating a clear and specific mechanism to organize the work of smart universities while keeping up with the rapid pace of technological advancements and providing flexible quality education for all. Dr. Mansoor Al Awar, Chancellor of HBMSU, headed the high-level delegation with Stefania Giannini, UNESCO Assistant Director-General for Education, who praised the role of the global initiative that paves the way towards creating a global model that redefines the quality of the smart and e-learning standards. She also lauded the UAE’s pioneering role in introducing an innovative concept that will make a historic, radical and positive impact in smart education, globally.

The HBMSU delegation presented an array of initiatives and experiences in the field of artificial intelligence that have garnered attention from the international community. The most notable among these is the ‘School of Artificial Intelligence’ - the first of its kind initiative in the UAE and the region aimed at stimulating, developing and creating smart educational skills necessary to anticipate and to build the future. This initiative falls in line with the national efforts aimed at making artificial intelligence technologies the engines of growth and development in the coming decade. On the sidelines of the conference, a series of meetings were also held with Dr. Al Awar, including a meeting with Dr. Peter Wells, Head of UNESCO’s Department of Higher Education.

Both parties discussed the expansion of the ‘Global Benchmarking Framework and Data Set’ in view of its standards and mechanisms for evaluating the quality of educational outputs based on information and communication technology and sound scientific basis that ensure reliable information and new directions. Dr. Wales expressed his support for the initiative and suggested several ways to include it in the Global Dialogue on Quality Assurance in Education online. Dr. Mansoor Al Awar expressed his happiness at the positive responses garnered by the ‘Global Benchmarking Framework and Data Set,’ which reaffirms the UAE’s leading position in developing a successful, unified and integrated global model to share its pioneering experience in smart education. He added that the UNESCO Mobile Learning Week 2019 is an ideal platform to highlight the country's efforts to redefine the standards of smart education, in line with the wise leadership's directives to invest in youth as they represent future.

Al Awar added: “We are pleased to hold bilateral meetings with senior UNESCO officials in a move that reflects high international confidence in our pioneering initiatives, particularly the ‘Global Benchmarking Framework and Data Set’ initiative, which is a big step forward in promoting innovative educational tools and raising the educational outputs in accordance with the requirements of the 21st century.

These efforts are necessary to create entrepreneurs, ambassadors of knowledge and innovation to explore and shape the future, in line with the strong guidance of His Highness Sheikh Hamdan Bin Mohammed Bin Rashid Al Maktoum, Crown Prince of Dubai and the President of the University. We are also keen to highlight the role of the School of Artificial Intelligence in adding value to higher education, inspired by the vision of His Highness Sheikh Mohammed bin Rashid Al Maktoum, Vice President and Prime Minister of the UAE and Ruler of Dubai, who has emphasized the pressing need to adapt and employ artificial intelligence technologies in accelerating comprehensive and sustainable development.”

Al Awar concluded: “The meetings generated very important outcomes. The first achievement is the proposal by UNESCO's higher education officials to include the ‘Benchmarking Framework and Data Set’ initiative in the Global Dialogue on Quality Assurance of Online Education, while we look forward to studying the proposal to join UNESCO's Category II Centre, for further collaboration to launch an open education institute in the framework of active partnership with universities in Asia, Africa and China. This reflects HBMSU’s strong presence among the smartest universities in the world, promoting the UAE’s position in the field, globally”.

During her speech at a special seminar held as part of the UNESCO Mobile Learning Week 2019, Serine El Salhat, Vice Chancellor for International Cooperation and Corporate Communication at HBMSU, highlighted the importance of creating an open partnership and enhancing efforts in the field of the use of artificial intelligence in education. She emphasized HBMSU’s readiness to consolidate fruitful cooperation frameworks with global stakeholders in order to transfer its accumulated expertise in the adoption of AI to serve education. Serine also elaborated on the university's leading initiatives in the field of artificial intelligence, including the Smart Building, Smart Campus and the School of Artificial Intelligence.

Dr. Soma Al Haj Ali, Director of Excellence Center and Governance Center, Acting Dean of the School of Artificial Intelligence at HBMSU, held an interactive workshop titled ‘The Next Wave of Disruption: Teaching and Learning in the era,’ where she discussed the prospects of artificial intelligence and its future active role in education.